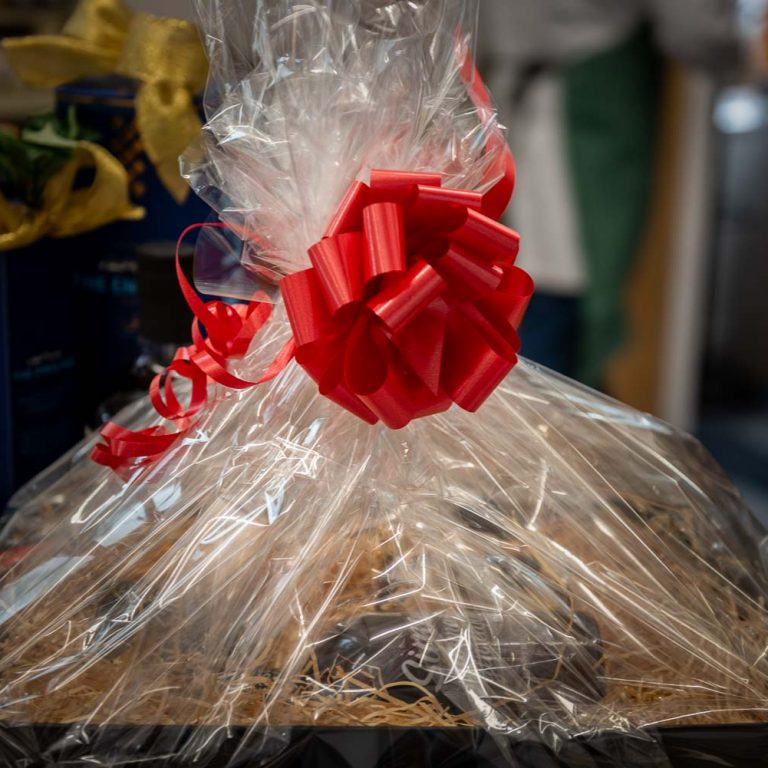 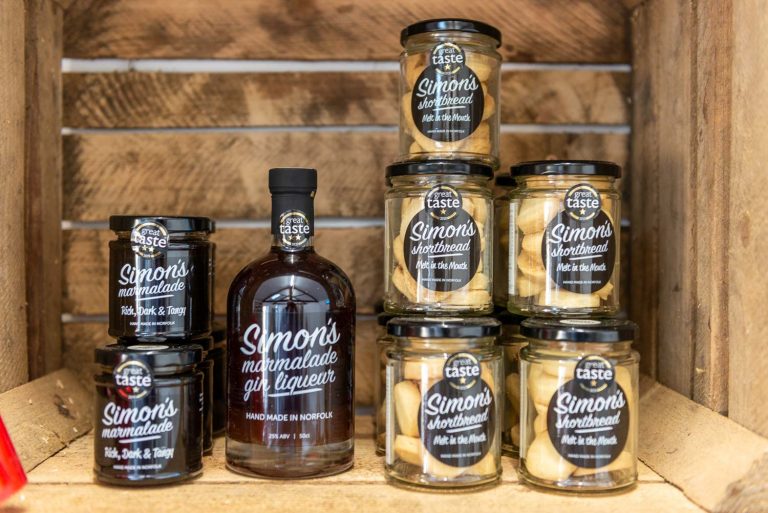 Made in Norfolk!
Nutrition:

Presented in a gift basket

Simon’s Marmalade is unusual!  It is a full flavoured, rich dark & tangy, Seville Orange and Lemon marmalade with caramel undertones and evenly distributed small chunks of peel.  The secret – the oranges and lemons are cooked for longer, at a lower temperature, releasing more from the fruit and after the sugar is added, it is boiled at a lower temperature for longer, where the caramelisation takes place.  Average cooking time is around 12 – 14 hours.  It has deep rich flavours that just keep on coming and is great on toast/croissant, in sauces/glazes or with firm blue and mature hard cheeses.

Simon’s Shortbread is a crisp, light, all butter shortbread that literally melts in your mouth. Carefully made in small batches, by hand in our kitchen at home, to a recipe we have been using for over 30 years.   We want it to be a treat. Something you can enjoy again and again, which is why such care is taken.

Simon’s Marmalade Gin Liqueur is made by infusing a London Dry Gin with Simon’s Rich, Dark & Tangy Marmalade, producing an orange, zesty liqueur that can be drunk on its own, with ice or prosecco or in a cocktail. It also works well as an accompaniment to a pudding, poured on a good vanilla ice cream or as a digestif.

We use cookies on our website to give you the most relevant experience by remembering your preferences and repeat visits. By clicking “Accept All”, you consent to the use of ALL the cookies. However, you may visit "Cookie Settings" to provide a controlled consent.
Cookie SettingsAccept All
Manage consent

This website uses cookies to improve your experience while you navigate through the website. Out of these, the cookies that are categorized as necessary are stored on your browser as they are essential for the working of basic functionalities of the website. We also use third-party cookies that help us analyze and understand how you use this website. These cookies will be stored in your browser only with your consent. You also have the option to opt-out of these cookies. But opting out of some of these cookies may affect your browsing experience.
Necessary Always Enabled
Necessary cookies are absolutely essential for the website to function properly. These cookies ensure basic functionalities and security features of the website, anonymously.
Functional
Functional cookies help to perform certain functionalities like sharing the content of the website on social media platforms, collect feedbacks, and other third-party features.
Performance
Performance cookies are used to understand and analyze the key performance indexes of the website which helps in delivering a better user experience for the visitors.
Analytics
Analytical cookies are used to understand how visitors interact with the website. These cookies help provide information on metrics the number of visitors, bounce rate, traffic source, etc.
Advertisement
Advertisement cookies are used to provide visitors with relevant ads and marketing campaigns. These cookies track visitors across websites and collect information to provide customized ads.
Others
Other uncategorized cookies are those that are being analyzed and have not been classified into a category as yet.
SAVE & ACCEPT